The Middle East continues to experience immense change and faces complexes challenges arising from a fragmentation and deconstruction of the Arab World (IISS Manama Dialogue, Bahrein) 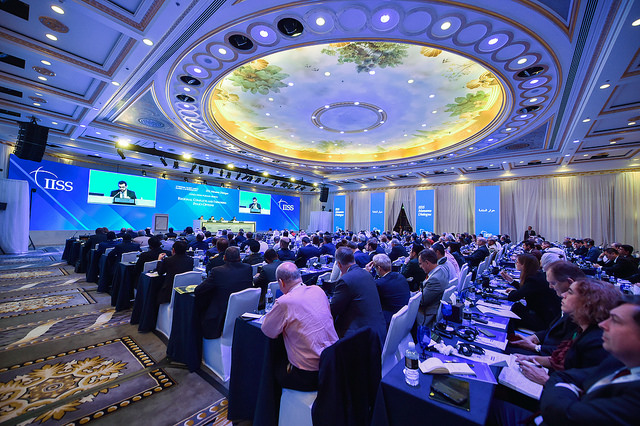 The 2017 IISS Manama Dialogue has become a central element in the Gulf’s regional security architecture where national and international leaders from the Gulf, the wider Middle East, North America, Europe and Asia can consult multilaterally on the most important security and foreign policy challenges of the moment. This year the conference focused on constructive and collective responses to the ongoing conflicts in the region, the menace of violent extremism and regional security challenges.

Some remarks by Youssef Amrani in the frame of the 13th Regional Security Summit, 8-10 december 2017:

The Middle East remain highly volatile and breakdowns, aggravating the balkanization of the Arab world. As everything is interlinked because of the indivisibility of the security and the common challenges we are facing, we cannot ignore the situation in the Maghreb and its sahelian projection. We need also to address the vision and the ambition of our neighbors towards our region namely the EU, which is facing crisis and divisions. The rise of nationalist movements advocating reclusiveness has led to geographic divides, including Brexit, which has irreversible geopolitical consequences for the future of the continent and the coherence of North-South relations.

Syria, Iraq, Libya, and Yemen sank decisively into the ranks of failed states with no longer any effective central authority over the expanse of national territory. ISIS arose as the largest radical threat in the region’s modern history, challenging political borders and order and proposing political identities and governance paradigms. Then there is the key Palestinian issue, which remains unresolved but has now been relegated in the hierarchy of emergencies. To think that the Middle East could regain stability without finding a lasting solution to this conflict is an illusion.

The Middle East is one of the few regions without any semblance of a regional security, economic, or political order to contain conflict and manage its intra-regional affairs. Why does the International Community still fail to achieve this? Why do we remain so deeply divided on the approach, methods and means that can help us work together to solve ongoing crises?

Today, the international community has not been able to come up with solutions to the current crises, particularly through the reform of the Security Council. One of the obvious reasons behind the failure of the International Community to work together effectively is the identity crisis that the Nation-State has been facing ever since globalization took over. What do we need today to ensure stability and security in the region ? What does all this mean for our region and for the Middle East’s future ?

The answers to our common challenges have one obvious common denominator: We need to work together through a common strategic vision for the region, at the regional and international levels, to tackle the problems that we face in security, stability and development. This start by:

Political and peaceful solution to these crises is needed, respecting the sovereignty and territorial integrity of the states. There will be no lasting peace without a political solution in Syria, in other words, without an open political transition, including all the components of the Syrian people, with the support of the United Nations. If it is true that we have been able to defeat militarily ISIS but defeating its ideology will be much harder. In Libya, the collapse of state institutions has stimulated the spread of terrorism, uncontrolled migration and trafficking of all kinds. Progress has been made, but for these successes to be sustainable, Libya must be able to return to unity, stability and security. It is with this in mind and to achieve an inclusive political solution, based on the Skhirat agreement. Today, we must support the work of the UN special envoy, Mr. Ghassan Salamé, in his efforts to promote dialogue between the Libyan parties.

We must play our part as a region and as countries of the Middle East, by doing our own homework internally, in terms of good governance, democracy, and structural reforms.The achievement of inclusive and multidimensional development is one of the foremost challenges. It hinges on striking the right balance between the imperatives of economic and social development. Moreover, we should seek to forge a unique development model based on the specificities of each country in order to benefit from shared prosperity, mutual economic opportunities and mutually beneficial human development.

Some views about collective answers that should be part of a genuine drive for change in our working methods, as a region, to respond to our common challenges and address their root causes:

These entire collective answers, Morocco has sought to apply them to itself, adapting them to its citizen’s needs, realities and values. This has led to the elaboration of a singular Moroccan Model based on a global vision and citizen-based, grassroots approach for building a modern country.

What makes Morocco different from other Arab countries is that there was a well-prepared political transition that started in the late nineties leading, in 1999, to the development of a new social contract and an adherence to a common vision of Morocco’s future focused on development as well as social justice and human rights.

From the very beginning of His reign, His Majesty King Mohammed VI has led the country on a gradual, endogenous and irreversible reform process that has helped our country build up its resilience and strengthen its institutions. This process was founded on a vision for a democratic, plural, open society and an approach seeking inclusive partnerships and realistic local solutions to specific problems. Morocco has always considered change as an opportunity for improvement, rather than wasting time and efforts resisting it.

Let me conclude, by quoting by His Majesty King Mohammed the VI in his last Speech pronounced to mark the opening of the Parliament on 13 october 2017 :

“Moroccans today need balanced, equitable development which ensures dignity for all, guarantees income, provides jobs, especially for our young people. Today, Moroccans want a good education for their children that guarantees integration into the knowledge and communication-based world, to the job market and contributes to individual and collective advancement. Moroccans also need a fair and effective judiciary. They want an efficient public service that caters for the needs of citizens and serves public interest. Although Morocco has made tangible progress, which is recognized throughout the world, we have to admit that our national development model no longer responds to citizens’ growing demands and pressing needs”.