“The Mediterranean now has an innovative and original platform embodied by the Union for the Mediterranean ». Secretary General Amrani speaking during the EPP Group Study Days in Marseille 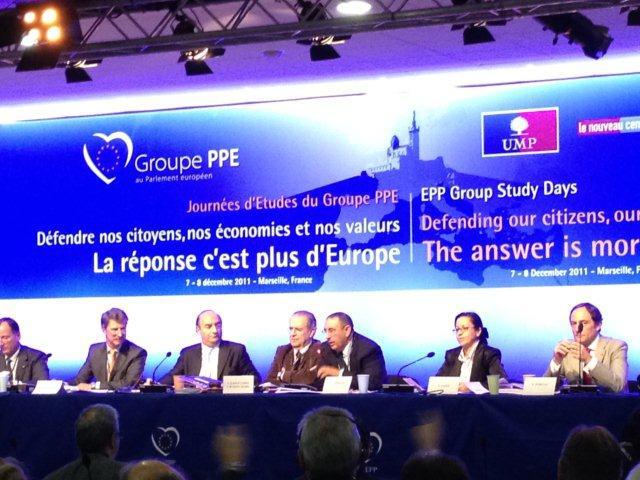 During his participation in Group Study Days organized by the European People’s Party (EPP) on 7 and 8 December 2011 in Marseille, Youssef Amrani, the Secretary General of the Union for the Mediterranean (UfM) said that « the new geopolitical configuration that is emerging in the Southern Mediterranean, should lead us to move from simple economic integration, to define a political Euro-Mediterranean partnership, to be more inclusive, responsive and based on performance. »

Briefing on the implementation of the UfM sectorial projects such as; the Mediterranean Solar Plan (MSP); the Mediterranean Strategy for Sustainable Urban Development; and the implementation of financial instruments; Youssef Amrani, stated that: « when the socio-economic needs increase, it is important to be innovative, pragmatic and efficient in managing the Euro-Mediterranean region, to answer the needs of its populations. We shall use innovative and realistic instruments, adapting it to new political regional realities, in addition, to improve the operational capacity and strengthening the coherence of the UfM with the various stakeholders of the Euro-Mediterranean Partnership.  »

Youssef Amrani elaborated that: “the power of the younger generation must be considered today as a key factor in building the future of democracy in Arab countries. » Also, he emphasized on the importance of « capitalizing on this dynamism of youth, the diversity of their cultures and the richness of the resources, by transforming the collective Mediterranean ambition into concrete initiatives, which will impact the livelihoods of all the citizens.”

Concerning the prospects of the relations between the South and the EU, Amrani commented that: « the changes occurring in the South will have an impact on the relationship among the Southern countries and between them, and the European Union, to that effect, more integration, more visibility about the future of their relationship is required. Those are crucial policy decisions to be taken by Europe in the coming years, and parliamentarians of the EPP Group, as the main group in the European Parliament, must be the supporters of a new Euro-Mediterranean relation.  »

In those lines, Secretary General Amrani highlighted that « In the same way the EU has been politically active in the East during the 90’s; now it is expected to strategically be involved in South of the Mediterranean, despite the complicated financial environment. »

Amrani concluded by stating that: « following the emergence of new political context, it is necessary that the EU engages in a constructive dialogue with the new leadership in the southern Mediterranean, in order to consolidate the shared universal values of democracy and the respect of the rule of law « . He also added that the Euro-Mediterranean partnership includes not only states, but also regional and local authorities and civil societies, that all should be fully associated to contribute substantially to this partnership. Earlier, Secretary General Youssef Amrani held talks with the EPP Secretary General Mr. Antonio López Istúriz MEP, where they discussed means of collaboration between the European Parliament and the Secretariat, in particular among those members belonging to the EPP Group.

The EPP days are being held together with the EPP Congress, which takes place in Marseille with the attendance of 15 Heads of State and Government of the EU.
The EPP Group Study Days were also attended by several prominent European and Mediterranean figures, including the President of the European Commission, José Manuel Barroso, President of the European Parliament, Jerzy Buzeck, Pablo Portas, Foreign Minister of Portugal and Franco Frattini, Former Minister of Foreign Affairs of Italy, and several MEPs

The EPP is the main political group in the European Parliament with 265 seats out of 736.