Signing of MoU between UfM & ASCAME 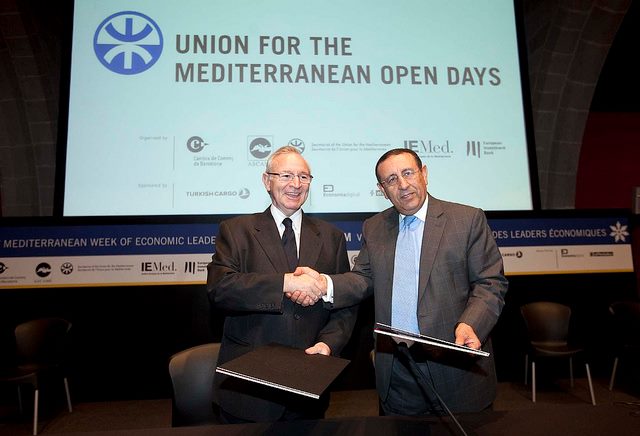 The UfM and Ascame commit to accelerate the economic integration of the Mediterranean
– The Union for the Mediterranean and Ascame signed an agreement aimed to strengthen the private sector involvement in the economic and social development of the region.
– Youssef Amrani, Secretary General of the UfM and Miquel Valls, President of the Chamber of Commerce of Barcelona and Vice President of Ascame, signed the agreement at the Casa Llotja de Mar de Barcelona.

As part of the V Mediterranean Economic Leaders Week, taking place from Monday to Friday at the Casa Llotja de Mar in Barcelona, the Secretary General of the Union for the Mediterranean, Youssef Amrani, and the Speaker of the House of Commerce of Barcelona, Miquel Valls, representing the Association of Chambers of Commerce of the Mediterranean (Ascame) signed a cooperation agreement with the key objective of strengthening private sector involvement in the economic and social development of the region, thus contributing to the consolidation of the economic and social pillar of the UfM.

The agreement also foresees the support of various initiatives of the private sector to develop an environment favorable to investment in the Mediterranean regions, as a basis for sustainable economic growth.
Specifically, the agreement aims to support initiatives that promote job creation, economic initiatives and social entrepreneurship, with an emphasis on small and medium enterprises, which represent 90% of all businesses in the region.

Mr. Amrani said in his speech that the current context marked by the economic crisis in several countries of the north shore of the Mediterranean and the political transition process experienced by the countries of the south shore are an opportunity to re-initiate the flow of investment and North/South trade which will create jobs and strengthen the economic growth in the region. He particularly insisted on the importance to develop concrete projects that involve young entrepreneurs, by facilitating access to technical and financial instruments.