﻿ No sustainable security, peace or stability in the region without three essential prerequisites: national democratic processes, socio-economic development and the preservation of the authentic spiritual and cultural identity to defeat extremism. - Youssef AmraniYoussef Amrani

No sustainable security, peace or stability in the region without three essential prerequisites: national democratic processes, socio-economic development and the preservation of the authentic spiritual and cultural identity to defeat extremism. 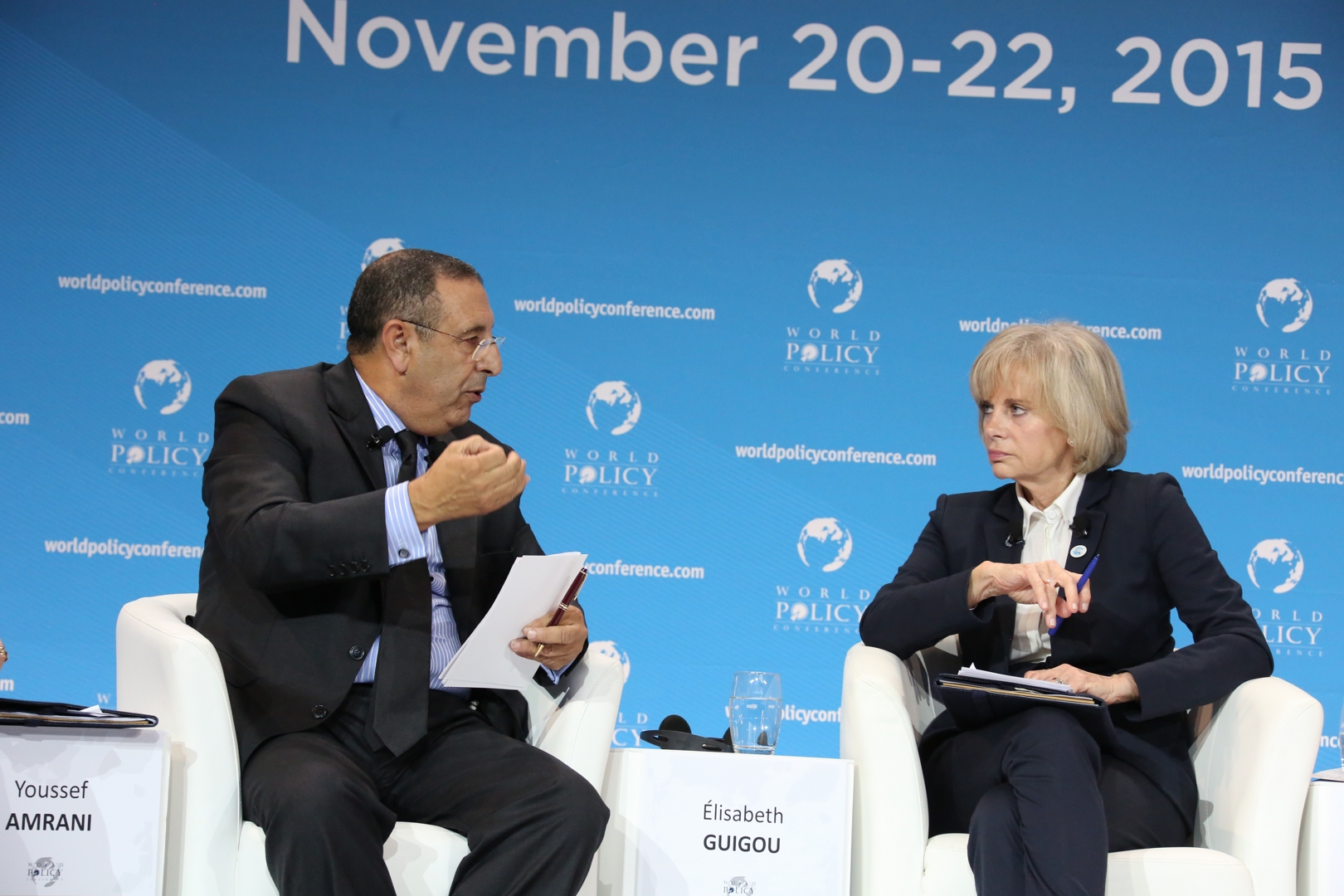 Since 2011, the North Africa and the MENA region precisely have been grappling with many hotbeds of instability and internal conflicts  and  engaged in an existential struggle against extremist  terrorism.

After 4 years of conflict and more than 300,000 casualties and over 10 million refugees in neighboring countries, Syria today is an increasingly fragmented nation: part of the country is controlled by the state, another by the State Islamic and Jabhat al-Nousra and a third part by the Sunni and Kurdish opposition.

As regards Iraq, and notwithstanding the international intervention in 2003, the country is also divided into 3 parts, with mostly Shiite areas controlled by the state, others controlled by Kurds and other areas under Daech control and faces tremendous challenges. We have to continue supporting the efforts undertaken in Irak to implement the reforms agreed to last summer in order to provide for an inclusive Iraq in which all of its ethnic and religious groups enjoy protection and have a say in the decision‑making of the country.

The situation is no better in Libya. The collapse of the former regime gave way to total chaos, with two governments, two parliaments and two armies. Today, only a political solution, inclusive dialogue and democratic and representative institutions, within the framework of Libyan national unity, territorial integrity and sovereignty can help resolve the serious crisis gripping the country. It was with this in mind that all warring Libyan parties started inter-Libyan political negotiations in Morocco, under the auspices of the United Nations, led by Mr. Bernardino Leon. The aim is to achieve a peaceful solution to the political crisis in Libya.

For this to be achieved, we must ask the right questions! How, in such an environment, can we expect to reunite Syria? How can we include all Iraqi factions in the process of assuming ownership of their own country?  Why is it that the international community remains divided on the approach, method and means to be used?

The weakness, not just of the states concerned, but also of the reactions to the problems has enabled a new player to gain momentum and territory. This is a terrorist group of a new kind – « Daech » – which controls large swathes of land and significant segments of the population, which runs economic ‘institutions’ and wants to challenge the idea of the nation state and seeking to construct alternate political realities.

Today terrorist groups have successfully adapted to their environments and are actively exploiting the unstable political situation prevailing in the Arab world and in particular, the ongoing conflicts in Libya and Syria, which are helping boost their weapons arsenal and recruitment capacities.

We can no longer afford to wait the time has come for robust action and solidarity in the face of this common threat.

In the face of such a shift in the regional balance a conflict has been going on for decades and continues to feed the frustration, not only of local populations but throughout the Arab-Islamic world: I am referring to the Israeli-Palestinian conflict. Is there still room for hope? What solution can be considered in the current political and security context? And, above all, how to bring the parties concerned to show more wisdom in such a chaotic global environment?

The Middle East peace process, as it has existed for the past quarter century, has collapsed. The problem goes well beyond the repeated failure of negotiations. Apart from the existence of the Palestinian state itself and the various arrangements needed to keep it afloat (tax transfers, security coordination, etc.), the bulk of the peace process “architecture” constructed since the 1993 Oslo Accords has been abandoned. The latest developments in Jerusalem, the crisis of the Palestinian leadership, the deepening of the Israeli occupation, and the  growing internationalization of the conflict demonstrated the inability of the “peace process” either to resolve the conflict or to manage it.

It is of the utmost importance that the entire international becomes more seriously involved in achieving this objective. The major powers (the EU,U.S  Russia) should put all their efforts to get the peace process back on track with a view to achieving the necessary two-State solution.

Lastly, after many setbacks, Tunisia and Egypt are trying to get back on their feet and continue to face chronic economic hardships, compounded by the terrorist threat looming large on both countries.

We welcome the nuclear agreement that was made between the P5+1 countries and Iran as an opportunity for this country to reintegrate itself into the region and to play a productive and constructive role.

Without forgetting the Sahel region which faces a deterioration of the political, security , humanitarian and human rights situation, exacerbated by the many challenges linked to the porosity of borders, cross border organized crime , as well as the proliferation of threats connected to terrorist groups in the Sahel-Saharan strip, threatening the stability of all states in the region.

We are therefore facing new facts on the ground, new urgent issues that require a rallying project that may help foster peace and stability in the southern Mediterranean and create a space for shared prosperity.

If there is a lesson from all this geopolitical mess, I would say:

– That no state or multilateral actor, however powerful it may be, cannot impose alone, crisis exit solutions;

– That the military interventions that had not been followed the post- conflict political support, have led to major crises not only in the countries concerned but also on their respective neighborhood.

The achievement of comprehensive, inclusive and multidimensional development is one of the foremost challenges. To this end, I should like to share with you some thoughts about collective answers that should be part of a constructive dynamic drive, similar to a « Marshall Plan for the Arab world, » which can help us rise to challenges in its three areas:

In the political sphere

By ensuring, first, the internal stability of all countries in the region; initiating institutional reforms that would consolidate the rule of law, contribute to the development of inclusive, participatory democracies, uphold human rights and develop the intrinsic capacities of States through the inclusion of all national forces in the achievement of a new political and social balance.

By implementing effective, multifaceted security cooperation to stem the threat of terrorism and Islamic extremism. Though several regional and international initiatives have been undertaken (United Nations, European Union, League of Arab States …), progress, so far, has been limited. It is up to us to set up the necessary mechanisms that can make our region immune to the terrorist threat. Our approach should be based on a realistic, comprehensive and consistent strategy that would deconstruct the jihadi hate speech and violence-prone discourse.

The opportunities in our region have to do with the economic development and investment and the building up of coherent regional groupings.  By making sure we have the means to position ourselves on the global economic arena; hence the importance of working towards the emergence of an influential regional grouping built on mutually beneficial cooperation.

In this chaotic context, the longstanding process has only grown stronger with time, gaining, over the past decade, a new, more ambitious dynamic under the leadership of His Majesty the King Mohammed VI.

There are a number of key factors which make our path unique and successful :

A longstanding Commitment to Democray:

Our reform process was built slowly, but surely, ever since our country’s independence, when Morocco opted for modernity, political pluralism and economic liberalism. The new Constitution advocated by the King and adopted by popular referendum in July 2011 enshrined this continuous reform process and gave it a strong new impetus, confirming its irreversible nature.

An inclusive and proactive Approach:

A clear Vision for the Future:

The driving force behind this approach is the clear vision of His Majesty the King for our Nation’s future, to keep evolving as a more democratic and open country. It is also a global vision, seeking to include all aspects of human development by promoting, side by side, the two essential pillars that are economic and political development.

Morocco is convinced that there can be no sustainable security, peace or stability in the region without three essential prerequisites:

Firstly: the need to strengthen the national democratic process, namely by introducing political reforms that can help widen the field of civil liberties. The political arena must be established as a credible and legitimate forum for responsible civic action, where any aspirations or grievances may be democratically expressed in full respect of the Rule of Law. Today, more than ever, a stable State, capable of defending its sovereignty and territorial integrity, is the best guarantee of security for populations and neighboring countries.

Secondly: the need for greater efforts in the fight against poverty, inequality, and social exclusion. The socio-economic development must remain at the very heart of any counterterrorism strategy seeking sustainable, long-term success. The International Community must identify the necessary means to help the countries of the region to overcome this challenge, namely by addressing the issue of poverty in a pragmatic and solidary way.

A third: another important need is the preservation of the authentic spiritual and cultural identity of the countries of the region to defeat the extremists.

In this connection, a coherent and sustained counter-messaging and strategic communications effort is vital to defeating Daesh and other extremists movements in the region.  We should vigorously engage, directly and through the media, to deconstruct the ideology of the Jihadist and the threat they pose to the region and beyond, particularly in Africa. Success will come from joining with people in the region, whose voices are the most credible, with key target audiences to undermine the Daesh narrative and present an alternative vision of hope for a better future.

This should be done through : Countering the Daesh narrative,  Facilitating effective counter-messaging, Coordinate unified strategic communications to isolate Daesh as a terrorist and criminal group, Solve the current crisis in Irak, Syria, Yemen, and Libya and provide for an inclusive and stable future for these countries.

Building on the strength of its ancestral links to many African countries – where Islam was often historically introduced by Morocco as well as the legitimacy derived from our Sovereign’s status of Commander of the Faithful and the credible results obtained from a successful reform of the religious field, the Kingdom of Morocco is well equipped to help preserve and promote a moderate, tolerant and open expression of Sunni Islam, such as it has always existed within our region.

To this end, Morocco, under the leadership of His Majesty the King Mohammed VI, is undertaking religious training programs currently benefitting hundred imams from Africa, to help provide them with an education that is fully respectful of the traditional moderate precepts shared by all countries adhering to the Malekite Rite.