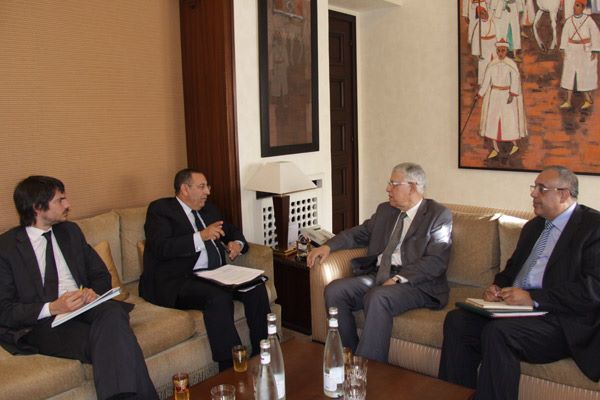 The Secretary General of the Union for the Mediterranean, Mr. Youssef Amrani, presented the new vision of the Union during meetings held on Monday in Rabat, with the prime minister, Abbas El Fassi and the Minister of Foreign Affairs and Cooperation, Taib Fassi Fihri.
Rabat – This new vision, according to Mr Amrani, is built on a comprehensive multidimensional –relations for the Mediterranean, oriented to promoting growth, support for employment and regional development.

He elaborated that this approach, is also based on greater a participation of the representatives of the civil society and youth through the Mediterranean Partnership projects.

Amrani also emphasized on the importance of equipping the UfM with effective and consistent instruments and mechanisms, especially with the recent regional context in the South Mediterranean countries.

The Secretary General of the UfM took the opportunity to discuss the projects recently adopted by 43 member countries of the UfM, in particular, the construction project dune desalination plant in Gaza, which will benefit more than 1.6 million people, in addition to projects on education and research and the integration of women in the business world. Amrani also added that the UfM is involved with certain Mediterranean countries to support the transition and economic recovery.
To this effect, the Secretariat will hold a conference in support of the development and investment in Tunis.

The head of government and the Minister of Foreign Affairs and Cooperation have expressed their full support to the work of the UfM and stressed the important role that the Union for the Mediterranean can play as part of the regional dynamics in progress and adapt its action to the new political and geostrategic.

This meeting, which is part dune tour in the countries of the Union for the Mediterranean, was an opportunity to discuss the latest events that took place in the Arab world and the new opportunities it brings to the partnership Euro-Mediterranean.