﻿ 6th Bosphorus Summit: The kingdom, stepping confidently into the future, is spearheading the effort to transform into a modern, developed and prosperous country, integrated into international trade. - Youssef AmraniYoussef Amrani

6th Bosphorus Summit: The kingdom, stepping confidently into the future, is spearheading the effort to transform into a modern, developed and prosperous country, integrated into international trade. 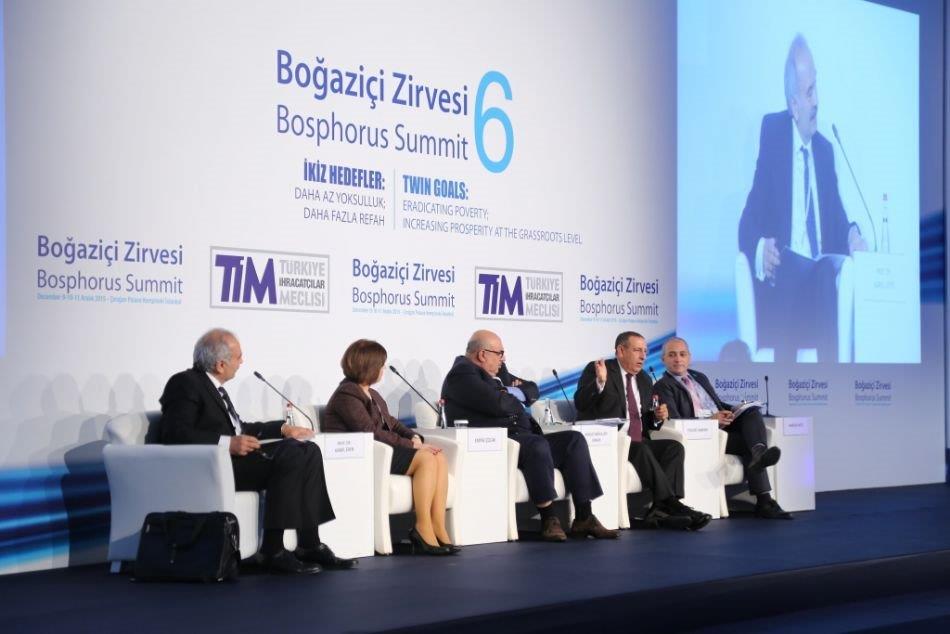 I am delighted to be here with you today for this Sixth Bosphorus Summit to address issues relating to our common future and to the means which need to be mustered ensure sustainable, harmonious human development on a global scale.

Let me first share with you some observations on the state of development in the world today and on medium and long term prospects and how Morocco, thanks to the vision of His Majesty the King Mohammed VI, succeed in this path, of working the human development as a priority.

Overview of the development situation in the world

Significant progress has been made in many areas since the adoption of the MDGs in 2000. Some goals, however, are still far from being achieved. Famine, poverty and deprivation in a wide range of sectors continue to be the day to day reality for more than one billion people around the world, particularly in sub-Saharan Africa and South Asia.

We are also faced with a self-reinforcing downward spiral of conflict, violence, extremism, humanitarian crises and difficulties arising from a surge in migrant flows, all of which is unfolding against the backdrop of the acute crisis that has paralyzed the global economy in recent years and that is threatening most of the accomplishments made in recent decades.

Just as frightening is the emerging scourge of global warming, which is threatening economic and social development. At +4°C, ours is a world where agricultural and natural resources are dwindling, where food security is no longer guaranteed and where infant mortality is on the rise.

So what conclusions can we draw from this overview of global development?

The eradication of poverty is going to be one of the greatest challenges of the coming years. For this reason, achieving comprehensive, inclusive and sustainable development is one of the most urgent challenges at hand.

This requires sustained economic growth, a more equitable distribution of the benefits of growth as well as a sustainable development model. Indeed, without a paradigm shift, crises and conflicts in the future will be increasingly triggered by the race for access to natural, energy and water resources. The collective responses to be proposed in this regard should be rooted in an inclusive, multidimensional approach:

The political and security dimension:

By ensuring internal stability and peace in region and countries and by introducing institutional reforms that consolidate the rule of law, and participatory democracies and through the involvement of all key stakeholders;

By combating illiteracy, through the development of quality education in tune with market needs, by fostering religious and cultural values…;

Why Morocco is moving in a good path while it’s surrounding region seems to be under pressure ?

Within this particular international context, Morocco, under the leadership of His Majesty the King, choose its own path of prosperity. I will try to provide some keys to understand the Moroccan global approach that is based on 4 capital elements:

Stability: the first element that supports the Moroccan model is the stability and of its institutional, political, economic, social and environmental aspects :

There are a number of key factors which make our democratic path unique and successful as the longstanding democratic commitment built since our country’s independence, when Morocco chose the ways of modernity, political pluralism and economic liberalism. His Majesty King is spearheading the effort to transform Morocco into a modern, developed and prosperous country, which integrated into international trade, beyond its immediate environment, and which steps confidently into the future.

Beside the political and institutional stability, a stable macro-economic frame was built. Morocco showing, in the last decade, an honorable results in terms of GDP growth (4,5% growth average over the decade), to develop citizens well-being in terms of access to base services, housing, education and healthcare and in order to promote wealth creation.

On the other hand, the country’s approach based on shared prosperity allowed ensuring a stable social climate due to major and progressive social gains. Just during the last 4 years, medical coverage have been provided to an additional 30% of the Moroccan population (reaching a total coverage of 60% of the population in 2014).

His Majesty the King has also sought to develop the country’s human capital, particularly our youth, by launching solidarity-based projects such as the National Initiative for Human Development (INDH), which was started in 2005. The Initiative has made it possible to address social deficits by enabling young people to access income- generating projects in an inclusive, promising environment.

In this respect, the advanced regionalization plan launched by the Sovereign to promote integrated, sustainable economic, social, environmental and cultural development reflects my country’s commitment to building a strong and diversified national economy  which can generate wealth, create jobs and achieve social justice for all.

Morocco reached, now, a level of institutional consolidation where the absolute majority of the citizens and of the political, social and civil society actors are willing and engaged to contribute to the country’s development through the institutions which is a major step in our democratic transition process.

The vision: the second element that characterizes the Moroccan model, is the clear Vision of His Majesty the King for the future of the country:

Established through the high guidance of His Majesty the King, this clear vision for our Nation’s future, is based on the strong political choices of the country to build a social participatory and inclusive democracy to keep evolving as a more democratic and open country.

To build a modern country, the Sovereign initiated several major sectoral strategies like: the green plan aiming to increase, by 50%, the GDP generated by the agriculture-sector and to create 1,5 additional jobs within 10 to 15 years, the emergence plan which consists in reinforcing 9 industrial export sectors to double the country’s exports within 10 years, the tourism vision 2020 and many other plans.

This set of plans and programs provides a real visibility to investors and operators; visibility that will be strengthened by the adoption of a programmatic finance act for 3 years starting from2015. Also, regarding infrastructure, Morocco is deploying ambitious programs in terms of roads, ports, rails, logistics and energy.

Given the importance of the environmental dimension, Morocco has also initiated a proactive policy to address climate change and promote sustainable development and environment protection. Several institutional reforms have been undertaken in this regard, such as dam policies (politique des barrages), the Environment Charter, the Green Morocco Plan, the Green Investment Plan, the ban on GMOs.

The Morocco’s contribution to the United Nations Framework Convention on Climate Change (COP 21) confirms the pioneering approach adopted by the Kingdom, which is a candidate for the organization of the COP22 in 2016.

Also, as a first step toward it’s growing partners, Morocco was the first country in the region to obtain an Advanced status with EU…Morocco is a stable country that is implementing an integrated inclusive and sustainable vision, with positive and promising results reinforcing the trust of international partners.

Morocco by its geostrategical position is a major gateway towards Africa. His Majesty the King pushed for a strong south-south cooperation policy in an extensive co-development strategy with most African countries. In addition to advocating a global partnership for solidarity-based development, Morocco has also put human and sustainable development at the heart of his Africa policy.

In parallel, His Majesty the King launched a successful reform of the religious domain, promoting moderate, tolerant and an open version of Sunni Islam, based on a multidimensional approach aimed at deconstructing the religious discourse of terrorist groups and preserving the country’s religious reference system.

To this end, Morocco is undertaking religious training programs currently benefitting hundreds of African imams to help provide them with training that is fully respectful of the traditional moderate precepts shared by all countries adhering to the Maliki rite.

The second largest west Mediterranean container transshipment port was commissioned in Tangier 3 years ago, more than 1000 km highways have been built in the last decade (Morocco having the second largest Highway network in Africa with more than 1’300 km). The Kingdom has thus managed to emerge as a major player in the global energy transition, with the Nour Solar Project. The energy transition program permitted already to commission more than 1’700 MW hydro-powered energy, more than 800 MW wind powered while the first 165 MW solar-powered plant is under construction. This program aiming to install 42% of the nations’ electricity capacity production out of renewable sources by 2020.

The emergence industry plan permitted already to create an automotive and an aeronautics sector from quasi-scratch, sectors that are now heavily contributing to the national value creation and to the nation exports attracting worldwide leaders like Renault. Regarding tourism, the first vision for the sector, established in 2001, was successful attracting more than 9 million visitors during 2010 out of the 10 millions planned and did overpass the planned revenues for the sector;

In this regard, Morocco did gain and maintain international trust in the last period. This is proved by the foreign investments directed to the country that reached a record level in 2013, by the renewed trust of the financial markets that permit to the country to raise financing at very attractive rates confirming the positive appreciation of the IMF (that renewed the precautionary credit line of 6,2 billion dollars granted to Morocco in 2012) and the support of the World Bank that raised its credits to country for the next 4 years (from 750 million annually to 1 billion).

To conclude, these were some key elements that hopefully could help understanding the Moroccan global approach. Morocco is deploying an ambitious human development plan that is progressively reducing geographical, gender, educational, health, housing and access to basic services inequities.