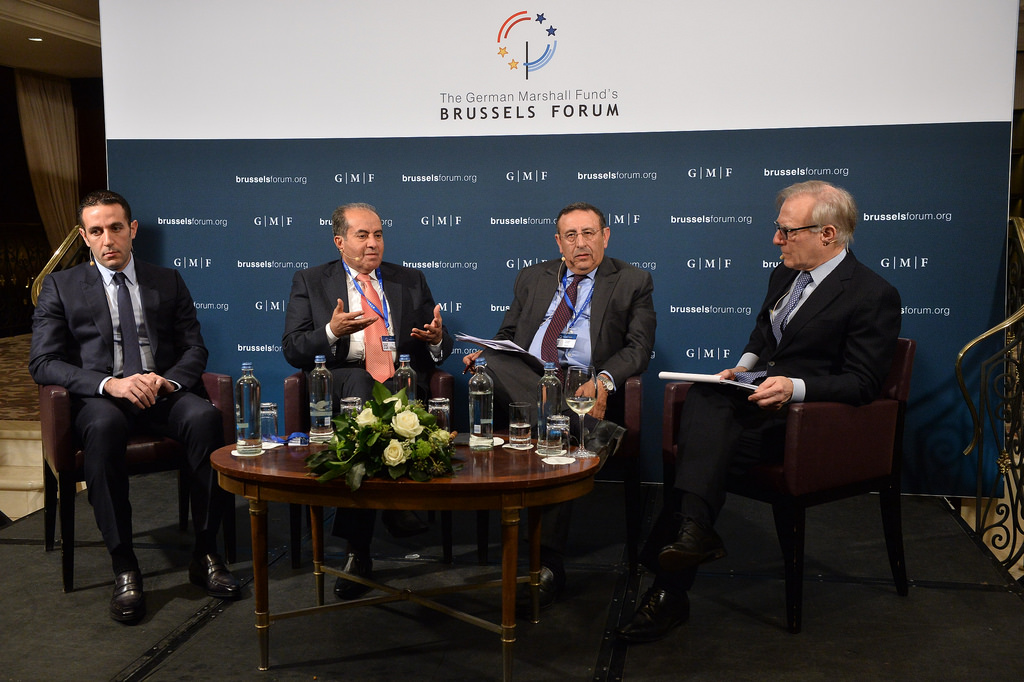 Intervention of Youssef Amrani in the 10th German Marshall Fund’s Brussels Forum, March 21,2015, talking on the panel « Conflict and Chaos in the New Middle East and North Africa Region ».

I should like to thank the Forum for the interest it is taking – beyond the question of the important transatlantic relations – in the situation and the future of the MENA region, and the impact the changing regional situation can have on global peace and security.

Indeed, since 2011, the Middle East and North Africa have been grappling with many hotbeds of instability and internal conflicts that have led to the dismantling of part of the border between Syria and Iraq, the splitting of Libya in two parts and the transformation of Yemen into jihadist rear base.

In the midst of this chaotic environment, some actors have passed the test of stability. I will mostly be talking about my country, Morocco, and its continuous development under the stewardship of His Majesty King Mohammed VI.

Then I would like us to think about possible ways for all stakeholders, starting with ourselves (the Arab-Islamic world) as well as Europe and the transatlantic community to work towards achieving shared prosperity, which is the only means to effectively combat stagnation and the never-ending cycle of crises.

1. Regional overview: the chaotic situation in the Middle East

Three years after the international intervention in Libya (by NATO allies in the Mediterranean region) and the fall of the Gaddafi regime, the country remains in the grip of a very serious political and security crisis, and the state has “collapsed”. The latter no longer has any authority over a number of regions have fallen under the control of heavily armed militias (more than 1,700 of them). Institutions are stalled (2 parliaments, 2 governments and 2 armies!), and the tribal and political gulf (between the liberal movement and the Islamists) is widening, representing a threat to the country’s territorial integrity.

The country has become a haven for jihadists, especially the eastern and southern parts. It can no longer guarantee the security of its weapons stockpiles (more than 800,000 small arms) nor that of its 4,000km-long border, in which all kinds of trafficking activities are thriving. The ever-growing influence of jihadi groups represents a threat not only for Libya and its neighbors, but also for the entire region and Europe. It is clear today that military intervention in Libya is not the appropriate solution and that it would only fan violence. Only a political solution, inclusive dialogue and democratic and representative institutions, within the framework of Libyan national unity, territorial integrity and sovereignty can help resolve the serious crisis gripping the country.

It was with this in mind that all warring Libyan parties started inter-Libyan political negotiations in Morocco, under the auspices of the United Nations, led by Mr. Bernardino Leon. The aim is to achieve a peaceful solution to the political crisis in Libya. Such a solution requires the agreement by the belligerents on a Government of National Unity and the cessation of violence.

Representing an important step, at a turning point, this meeting brought together, for the first time around the same table, the two factions (the parliaments of Tobruk and Tripoli). Although this process will apparently be long, complex and fragile, it is important to guard against foreign interference, in particular destabilizing acts by some states, in order to enable Libyans themselves to set up a national unity government that can effectively combat terrorism and restore peace and stability.

After 4 years of conflict and more than 200,000 casualties and over 4 million refugees in neighboring countries, Syria today is an increasingly fragmented nation: part of the country is controlled by the state, another by the State Islamic and Jabhat al-Nousra and a third part by the Sunni and Kurdish opposition.

As regards Iraq, and notwithstanding the international intervention in 2003, the country is also divided into 3 parts, with mostly Shiite areas controlled by the state, others controlled by Kurds and other areas under Daech control. I will spare you the heavy human toll and the long list of brutal destruction visited on the country on a daily basis.

Yet the most serious consequence, in my opinion, is the inability of the world community to safeguard the borders inherited from the Great War. The Middle East – as we have known it – exists no more! It is essential, however, that this region, which is the epicenter of ethnic, religious and political tensions, regain its geostrategic balance.

For this to be achieved, we must ask the right questions! How, in such an environment, can we expect to reunite Syria? How can we include all Iraqi factions in the process of assuming ownership of their own country? Why is it that the international community remains divided on the approach, method and means to be used?

The weakness, not just of the states concerned, but also of the reactions to the problems has enabled a new player to gain momentum and territory. This is a terrorist group of a new kind – « Daech » – which controls large swathes of land and significant segments of the population, which runs economic ‘institutions’ and wants to become a sovereign state!

In the face of such a shift in the regional balance and the still unclear – not to say controversial – role of Iran, a conflict has been going on for decades and continues to feed the frustration, not only of local populations but throughout the Arab-Islamic world: i am referring to the Israeli-Palestinian conflict. Is there still room for hope? What solution can be considered in the current political and security context? And, above all, how to bring the parties concerned to show more wisdom in such a chaotic global environment?

It is of the utmost importance that the entire international becomes more seriously involved in achieving this objective. The major powers – all of them – (the EU, Russia…), and not just the United States should exert pressure on Israel to make sure that, whoever wins the coming election, a team of proactive, open and confident negotiators join the effort to halt Israeli settlements and embark, once again, on the road to lasting peace in the region.

The situation in this country has, for several months, been critical despite the flicker of hope created by the recent signing of a political transition agreement. The shia Anasarallah fighters – known as the Houthis – who have come from the northern part of the country to challenge the Sanaa regime, have staged a series of deadly attacks against government institutions, which they now control.

Backed by Yemen’s neighboring states, the United Nations are brokering negotiations to put the agreement back on track. In this respect, Riyadh will soon host a meeting of Yemeni parties that are keen to safeguard the country’s security and stability, and ensure a return to the political process.

2. Morocco in this turbulent regional environment

In the midst of the crises and conflicts plaguing the region, Morocco has managed to safeguard stability, preserve social cohesion and consolidate its multiform development process. To help you understand how this has been achieved, I would like to tell you who we are and what we are aiming at.

All these factors – the vision, the approach, the longstanding nature of our efforts – are the building blocks of the unique Moroccan democratic experience :

The Moroccan experience confirms that there is no such thing as an Arab or Muslim exception. It shows that Islam is perfectly compatible with democracy, human rights and freedom. It is proof that evolution is possible without bloodshed, without disruptions and without uncertainty about the future ;

For these reasons, and despite all the difficulties it may encounter, Morocco keeps moving forward. No matter the challenges, what is important is that we keep moving in the right direction, and this constitutes an absolutely irreversible commitment.

3. What prospects for the region?

Beyond the success of the Moroccan model I have just presented to you, our wish is for the entire region to benefit from shared prosperity, from mutually beneficial human development and economic opportunities.

To this, reinforcing regional groupings would obviously be a top priority. I do not think I need to remind you of the cost of not having a functional Maghreb, or the absurdity of continuing to wear blinders and failing to realize that the five Maghreb countries need to unite and tackle – together – the threats and challenges facing them.

How can we best address them, one might ask? In fact, we need a three-pronged strategy:

At political level: develop each country’s inherent capabilities through the involvement of all forces in each nation in the process under way; ensure the primacy of the rule of law and fight corruption and abuse of public property.

At economic level: create jobs especially for young people and kindle their hope in a better future, through viable economic development programs that can contribute to a much-awaited recovery;

At security level: ensure relentless, uncompromising struggle against terrorism and Islamic radicalism, as represented by “Daesh” today. This should be a multiform, multidimensional struggle (not just militarily, but also in terms of ideology to ensure de-radicalization of fighters and the deconstruction of the jihadi discourse).

Surely, we are the first concerned and we need to take our destiny in our own hands; however, our partners should also help. Europe and the Transatlantic community have a key role to play in this respect.

As far as Europe is concerned, it is not possible to continue using the same old support policies of (WMM?…etc.). Rather, it is important to agree on dynamic initiatives when it comes to economic and social development, as part of a revamped neighborhood policy.

It is therefore necessary to develop a new European policy, not as rules and regulations imposed on the countries of the South, but as a win-win partnership. Indeed, peace and economic revival in Europe hinge on stability and development in the Southern shores of the Mediterranean.

As regards our transatlantic partners, NATO’s conventional military involvement is no longer sufficient. We need to develop, together, the means required for comprehensive recovery in the region. Why not launch a new Marshall Plan for the Mena region?

Such a plan can be multidimensional and be applied at the three above- mentioned levels: