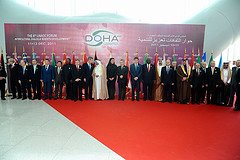 The Secretary General of the Union for the Mediterranean was among the participants, World leaders and civil society’s organizations attended the United Nations Alliance of Civilizations (UNAOC) 4th International Forum held in Doha, the capital of Qatar during 11-13th December.Speaking during the first plenary session, entitled: ”How does culture matter to development, the missing link!”  together with Mr. Tsakhia Elbegdorj, President of Mongolia, Mr Amadou Toumani Touré, President of Mali, Ms. Irina Bokova, Director General of UNESCO, and Mr. Markus Hipp, Executive Director of BMW Stiftung, Amrani commended the work so far achieved by the UNAOC, and highlighted that this is only the beginning of a long but rewarding path. He also elaborated on the fact that Culture, in all its dimensions, is a fundamental component for sustainable development. Amrani added that the contribution of culture to sustainable development should be evaluated mainly by its social impact and especially by its capability to enable an active citizenship.

The Secretary General explained that the main mission of the UfM Secretariat is to increase, promote and ensure the coordination of regional, sub-regional and transnational UfM projects in order to improve socio-economic development, regional integration, sustainable development and the exchange of knowledge among and within the countries of the UfM. He elaborated that the added value of the UfM structure is that, for the first time, it offers countries of the Euro-Mediterranean region a partnership based on an equal footing. At the same time, the UfM framework is the most suitable tool to implement such closer cooperation.

Amrani also explained that the Arab spring is quickly transforming the societies in the south and the economic crisis is deeply affecting the north of the Mediterranean. Both processes will have a great impact on how the region will develop in the coming years.

The United Nations Alliance of Civilization (UNAOC) was established in 2005, at the initiative of the Governments of Spain and Turkey, under the auspices of the United Nations. It aims to improve understanding and cooperative relations among nations and peoples across cultures and religions. The UNAOC Secretariat, which is based in New York.