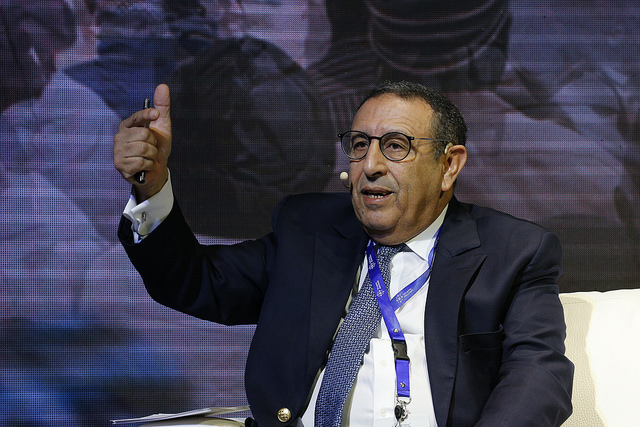 Today’s context is an opportunity for us to discuss on the ways of addressing rising challenges in Africa and allow us to take advantage of the significant potential offered by a series of positive synergies as developments concerning peace restoration, strengthening democracy, strong economic growth, in order to enhance States’ resilience and promote inclusive, sustainable development for the benefit of our populations.

Africa is also facing new and old challenges in a particularly complex and serious terrain and multiform chronic instability (political, economic, social, security, climate, migration…), which are hampering States’ capacity for development and the required growth to sustain its human development. Many challenges to which it must successfully rise in order to achieve sustainable human development and ensure inclusive growth and progress for all.

While it is true that Africa is an economically emerging continent, it remains nonetheless vulnerable, as evidenced by the situation in the Sahel. Now more than ever, the Sahel is revealing its true nature: a shared space whose risks and opportunities cannot be tackled without strong and pro-active regional integration to counter the region’s underdevelopment. No policy, security advances or development can be sustained if it is pursued by individual states. North African and Sahelian challenges cannot be dealt with separately.

The increasingly complex transnational and transregional security treats, including jihadist terrorism are clearly affecting all counties as they are all concerned to varying degrees, by the current security developments and by the multiform challenges (arms circulation, drugs, smuggled wares etc…) and migrants across the grey zones within Sahel.

Insecurity across the Sahel-Sahara is fueled by the implementation of radical Islamist groups and transnational criminality, which was facilitated by porous borders. The growing mobility of conflicts means that there is a real prospect of deeper links between regional terrorist groups such as Daesh, AQMI, and Boko Haram who settle and spread, destabilizing all the region and other parts of Africa. They are also exploiting institutional weaknesses, socio-economic challenges and state rivalries in the Sahel and Sahara region.

So many risks and challenges, with consequences threatening peace, security and sustainable development and which call for a coordinated and coherent response, through developing appropriate mechanisms such as an active and efficient security cooperation, a pro-active regional integration and by ensuring internal stability of all countries in the region to counter the region’s challenges.

We need to work together, through integrated, symmetrical and consolidated partnerships, involving all development actors, within the framework of a comprehensive approach, in order to promote security, economic growth and human development.

In this regard, NATO, as a global player in the area of international security, should rethink its guiding policy and reinvigorate its tools in order to retain its main player and to remain a major provider of global security, particularly in the immediate vicinity of the Euro- African space, in an effort to promote all kinds of initiatives or actions likely to increase the sense of co-ownership in the countries of the south.

While it is true, today, that the threat is of a more global nature and that security is indivisible, it is nonetheless a fact that certain responses should take into consideration parameters that are specific to the region and context concerned.

This is dependent on a major variable, namely the paradigm change vis-à-vis the South. Today, Africa is shaping its own destiny and engaged on the path of development, thanks to an enormous human and natural potential, transforming the continent into an inevitable globalization actor.

These new partnerships are part of a genuine dynamic of change, which is likely to generate security, stability and sustainability factors. In this regard, four fundamental parameters should be promoted:

By ensuring, first, the internal stability of all countries in the region; initiating institutional reforms that would consolidate the rule of law, contribute to the development of inclusive, participatory democracies, uphold human rights and develop the intrinsic capacities of States through the inclusion of all national forces in the achievement of a new political and social balance.

Cooperation in the field of Security is important. I would like to share with you the situation the Sahel region. The G5 Sahel Force is still gaining momentum at the political level. They are now gathering their lessons learned from this operation and adjusting their tactical and operational mechanisms.

– Facilitate humanitarian operations and the delivery of aid to affected populations, as far as possible

As Africans, we cannot say we need African solutions to African problems and not start with our own security. If you add the youth unemployment dimension to this nexus, ISIS and AlQaeda will easily be able to recruit new fighters. This is what happened in the northern part of Cameroun where Boko haram was able to enlist teenagers and young men in their ranks simply by giving them a salary or buying them a motorcycle.

This shows that we need a holistic approach when it comes to addressing hard security challenges with an big emphasis on human development and job creation.

3. A pro-active regional integration to counter the underdevelopment

New challenges on the ground generate additional risks for economic, social and environmental dynamics, but also opportunities. Only a South-South active and effective economic integration is likely to pave the way for achieving complementarity between African countries, namely through enhancing regional economic groupings, with a view to allow greater economic openness, better competitive insertion into global economy and to rise to globalization challenges.

This can be achieved through enhancing the diversity of national resources and richness, the diversification of the economy, the promotion of sustainable investments (namely in infrastructure), the transfer of knowledge in terms education and technologies and, above all, the creation of jobs and income-generating activities for the young, who are the real catalyst for development.

Cooperation across North Africa is also an imperative and one that will cost us dearly, for generations to come, if it continues to be thwarted for short-term political gains. Morocco has ceaselessly called upon the relaunch of the Arab Maghreb Union as an ideal platform for genuine cooperation across all sectors.

That is why proactive regional integration was repeatedly called for as the necessary means to counter the Maghreb’s economic underdevelopment effectively and to bridge the huge trade gap for which our region has sadly exceeded all records of underachievement.

Our wish and priority is for the entire region and the Sahel Sahara to benefit from shared prosperity, from mutually beneficial human development and economic opportunities. This can be done through the establishment of a model of global governance based on the respect of the specificities of each country of the region and through building the foundations for a new, fairer economic order.

Morocco is a firm believer in the importance of cooperation. By cooperation we mean concrete, operational and efficient forms of cooperation. We are great supporters of any effort, whether at the bilateral, regional or multilateral level, so long as it is pragmatic and useful. This has always been part and parcel of our interaction with the outside world and today, more than ever, in our interconnected, interdependent world, we need to work together.

Under the stewardship of His Majesty the King, Morocco has been focused over the past decade in promoting south-south cooperation as well as mutually beneficial partnerships throughout Africa. The visits paid by His Majesty to west, central, east and southern African nations attest to the credibility of our country’s actions across the continent.

As far as Morocco is concerned, Africa is clearly the continent of the future, given the continent’s driving forces, its young population and its natural resources. Moreover, it has great potential for strong sustainable growth. Today, the continent has a wide range of multidimensional assets that should be properly leveraged to achieve sustainable, equitable human development.

This is the essence of the Kingdom’s African vision, as desired by His Majesty King Mohammed VI. This vision is based on three basic elements: promotion of peace and security, the imperative need for shared growth and capitalizing on lasting solidarities, which are set to promote openness and stability in the continent.

In addition, the Kingdom is contributing to the education and training of the future academic, military, security and spiritual elites (M6 Imam’s training institute) of Africa. It invests in the promotion of human development and economic resilience, while actively contributing to regional stability.

A deeply rooted presence in Africa, the next engine for world growth

Under the stewardship of His Majesty the King, Morocco has been focused over the past decade in promoting south-south cooperation as well as mutually beneficial partnerships throughout Africa. The visits paid by His Majesty to west, central, east and southern African nations attest to the credibility of our country’s actions across the continent.

In addition, the Kingdom is contributing to the education and training of the future academic, military, security and spiritual elites (M6 Imam’s training institute) of Africa. It invests in the promotion of human development and economic resilience, while actively contributing to regional stability. There can be no development without human security, and there can be no lasting security and peace without development. Africa has the potential of becoming the world’s next food basket and Morocco’s expertise in agriculture and phosphates is being put to use to address food insecurity (soil fertility maps, fertilizer plant in Ethiopia).

Public Private Partnerships (PPP) are an important vector of Morocco’s African policy and the Moroccan private sector has become a driver of economic growth on the continent. Moroccan banks (Attijariwafa bank, BCP and BMCE Bank of Africa), insurance companies (Saham Assurance, Wafa Assurance, RMA), telecommunication operator (Maroc Telecom) are present in over 20 African countries, contributing to the rise of Africa.

In 2017, Morocco became the largest African investor and 5th largest investor in Africa with over 5 billion dollars earmarked for over 20 projects, capturing 85% of Morocco’s foreign direct investments.

Morocco is a stable country that is implementing an integrated inclusive and sustainable vision, with positive and promising results reinforcing the trust of international partners. Moreover Morocco is the gateway to the booming African continent and is, historically, a partner of choice of the EU.

For that reason we need to face, together, the greater challenges that are targeting us all,   terrorism, radicalization, security, energy, and climate change etc. Our European partners need to review their strategy towards Africa and need to invest in the development of Africa. We need a stronger partnership with UE, both at the political and economic level, with new tools and more ambitious approaches Promoting Peace and Security.